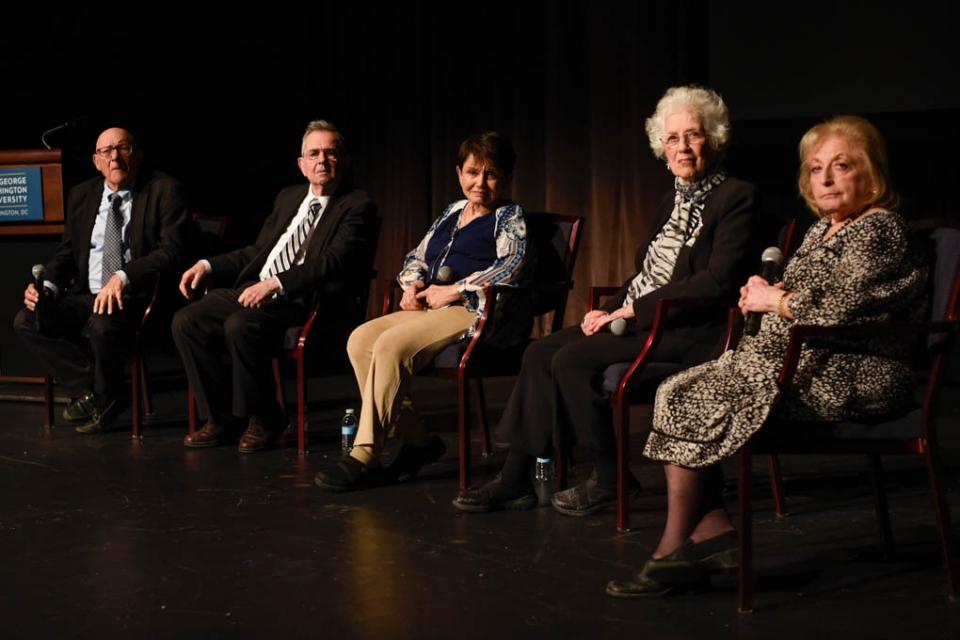 Holocaust survivors who were refused asylum by the U.S. in 1939 take note of the date with the GW Rohr Chabad Center for Jewish Life.

Jan. 27 marked the 75th anniversary of the liberation by the Russian Army of Auschwitz Birkenau, the largest Nazi concentration camp where 1.1 million women, men and children, mostly Jews, were killed during the Holocaust.

In commemoration of the anniversary, the Rohr Chabad Center for Jewish Life at GW, screened the film, “Complicit,” a documentary by producer Robert Krakow about the refusal of the United States government to grant asylum to 937 Jewish passengers who fled Nazi Germany aboard the S.S. St. Louis.  The ship had already been turned away at Havana, Cuba, where just 27 passengers were allowed to disembark.

“We’re also here to face questions about how you and I must be vigilant not to be complicit ever again,” said Rabbi Yudi Steiner of the Rohr Chabad Center. “As the saying goes, ‘The only thing necessary for the triumph of evil is for good men (and women) to do nothing.’”

Before the screening of the film, Stuart Eizenstat, former ambassador to the European Union and special representative to then-President Bill Clinton on Holocaust era issues, gave remarks.

“Nazi Germany would not have been defeated without the bravery of American soldiers,” said Mr. Eizenstat, who successfully negotiated major agreements with European countries for the restitution of property, payment for slavery-enforced labor, and recovery of art, bank accounts and insurance policies.

But years before the U.S. entered the war, the decision by the Roosevelt administration to turn away the S.S. St. Louis emboldened the Nazi government, he said.

Mr. Eizenstat described the “tortuous negotiations” undertaken by U.S. Secretary of Treasury Henry Morganthau, the member of FDR cabinet who focused on the plight of the Jews. He urged then-Secretary of State Cordell Hull to allow the refugees’ entry on humanitarian grounds “while they waited for days within tantalizingly close view of the lights of Miami.” Secretary Hull advised President Franklin Delano Roosevelt to refuse entry because the passengers had no return addresses.

The “courageous non-Jewish German Capt. Gustav Schroeder” was intent on not returning to Nazi Germany and set sail for Antwerp where England, France, Belgium and the Netherlands each took in a quota of the passengers, he said.

More than 250 passengers aboard the St. Louis died under Nazi rule.

Mr. Eizenstat said it didn’t have to happen. The plans for the Final Solution—the Nazi policy for exterminating European Jews—were not drawn up until 1942. When the United States refused to take in the Jewish refugees in 1939, he said, it sent an “unmistakable signal to Adolph Hitler and the Nazi regime that Jews were expendable, Jewish life was cheap, and that no one would lift a finger if the Nazis genocide program proceeded.”

Following the film, which depicted life aboard the S.S. St. Louis and the despair of the passengers when turned away, the survivors participated in a Q & A with the audience, many of whom wanted to know if parallels could be drawn to the present day.

“Anti-Semitism has never gone away,” Ms. Wiener said. “It was always there. Unfortunately, it is rearing its ugly head again. What I say to students, not only Jewish students, but all students: Not only are you permitted, but you are encouraged to stand up against atrocities.”

Ms. Geismar said that it is important not to regard “people as the others” and “to look at each other as part of humanity, all of us… especially in this era of ‘others and us’ with so much hatred against others being fomented.”

The Rohr Chabad Center for Jewish Life at GW gave certificates to Mr. Eizenstat, the German Embassy’s Deputy Chief of Mission Ricklef Beutin and Canada’s deputy ambassador for their continued fight against anti-Semitism.