1939: when jewish refugees were turned away 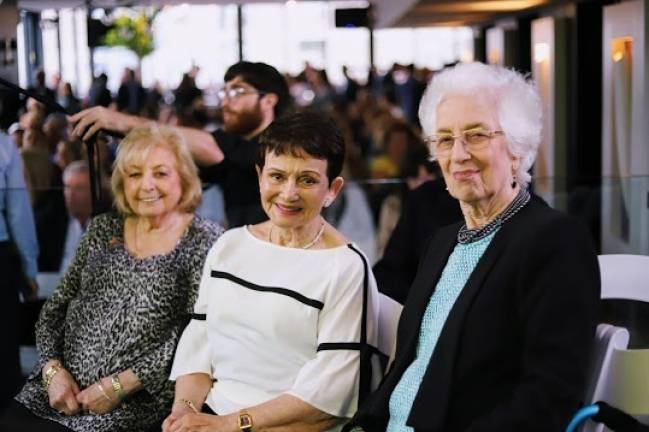 The Holocaust wasn’t just about the extermination of 6 million Jews, but also showing the world that no one wanted them.

Hitler proved this when a ship, MS St. Louis carrying more than 900 Jews was denied entry to the United States, Cuba and Canada in May 1939.

To commemorate the 80-year anniversary of this notorious incident, the Upper East Side Chabad held an event at the Bentley Hotel, 500 East 62nd Street on May 28, where survivors of the ship spoke and a movie, “Complicit” was shown. The film is the untold story of why the Roosevelt administration denied safe haven to Jewish refugees.

The film explores the impact of the WWII Jewish refugee issue on FDR’s legacy through a mythical courtroom drama that puts President Roosevelt on trial for complicity in crimes against humanity. It also features never-before-seen footage of U.S. Special Envoy Hannah Rosenthal’s expose of America’s inadequate response to the Jewish refugee crisis.

“Hitler was allowed to tell the world no one wants them,” said the film’s director Robert Krakow. “The St. Louis fell into that narrative.” According to Krakow, there are approximately 15 to 20 survivors living in the U.S, one in Israel, two in the U.K. and one in Australia.

Rabbi Ben Tzion Krasnianski of the Upper East Side Chabad told the attendees that it is important to never forget how the people of the St. Louis were treated. America is supposed to be safe haven, not a place where people are shunned, he said.

“It’s especially cruel to be so close to freedom you can taste it,” the rabbi said. “Our leaders did not have the courage.”

In May 1939 the Motorschiff St. Louis left Germany with 937 Jews, intending to embark in Cuba. However, Cuba, America and Canada, all citing visa quotas, did not let them disembark.

The ship was forced to return to Europe, where various European countries, including the U.K., Belgium, Netherlands and France, accepted some refugees. Many were later caught in Nazi roundups of Jews in occupied countries, and some historians have estimated that approximately a quarter of them died in death camps during World War II.

In 2012, the United States Department of State formally apologized in a ceremony attended by 14 survivors of the incident. In 2018, Canadian Prime Minister Justin Trudeau apologized as well.

Eva Weiner, Judith Steel and Sonja Maier Geismar were children on the ship, but know what took place was a travesty.

Maier Geismar, 84, a native of Baden in Southwest Germany, lives in the Bronx and was on the St. Louis at the age of 4. While she was too young to fully grasp what took place on the ship, she remembers a few things.

She recalled how the elegant cruise ship had fancy food, chandeliers and how she saw black people for the first time there. “I remember Kristallnacht and I remember the ship,” she said.

When the ship dispersed passengers in various countries she was fortunate that her family was put in England. They lived there for eight months before immigrating to America.

As she looks back at what took place, she is angry, but understands there were immigration laws and quotas.

“It was a mistake definitely,” she said. “It was cowardly, but if you look at the circumstances they would not have made exceptions. I was a child. I didn’t know something bad was happening.”

“I always used to ask God, why did you keep me alive and why did my parents die,” she said to the audience. “I think it’s really important that non-Jews learn about the Holocaust and learn that it should not happen again.”

Steel told Our Town that if Israel had existed in 1939 her family might have gone there instead of America.

Her family resettled in France, which was occupied by the Nazis a year later. While her parents were killed in a death camp, Steel was hidden by a French Catholic family for four and a half years. She eventually came to America in 1946 and became a cantor at the New Synagogue in NYC.

While she was just a toddler on the ship, deep down she knows what happened.

“There’s something in the DNA that remembers,” she said.

Weiner, 80, a resident of Neptune, N.J., speaks often about the St. Louis and the Holocaust. She talks at schools and synagogues and feels it is important to educate people about what took place.

Weiner, like the other two women, has very little memory of being on the ship. She was 10 months old on the St. Louis, so her knowledge came from her parents, Cypora and Jakob Safier.

Weiner recalled how her family made it to England after the St. Louis and eventually came to Astoria in 1946.

“They had told me about the ship, but I had no idea it had any significance,” Weiner said. “It was actually the precursor to WWII.”